Iain Cooper was born in Bristol and began his musical education as a chorister at St. Mary Redcliffe and later at the Cathedral. He read Music at Keble College, Oxford, where he accompanied the Chapel Choir and directed the undergraduate chamber choir the Arcadian Singers and the Cumnor Choral Society. He also holds a Master’s degree from Bristol University for his work on the English composer Gerald Finzi.

A twenty-year teaching career followed, including five years as Director of Music at the King’s School, Peterborough (the Cathedral’s choir school) and a decade at the Perse School, Cambridge, building up a large and successful department as well as conducting the Cambridge Youth Orchestra.

In 2002 Iain moved to the South West and embarked on a freelance career, examining for ABRSM, teaching for the Open University and on the instrumental staff of Dean Close School, Cheltenham, conducting, writing and composing. In 2004 he became conductor of Bridgwater Choral Society in Somerset, which in May 2018 gave the premiere of his Benedicite for Choir, brass, piano and timpani.

Since 2012 Iain has been based in Guildford and was recently delighted to be appointed Musical Director of the North Downs Consort. 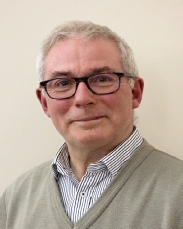